The Grammy winner – who had to use a wheelchair and crutches to get around Las Vegas’ Grand Garden Arena for the ceremony on Sunday night (03.04.22), after falling out of bed – has revealed her follow-up to her 2017 debut studio album ‘Ctrl’ is finally complete, and she teased it’s her “most unisex” LP to date.

Speaking to Variety, she said: “I just finished it up in Hawaii.

The 31-year-old star – who was helped by Lady Gaga, who lifted the train of her gown when she collected the award for Best Pop Duo/Performance for ‘Kiss Me More’ with Doja Cat – also explained why she required a wheelchair and crutches. 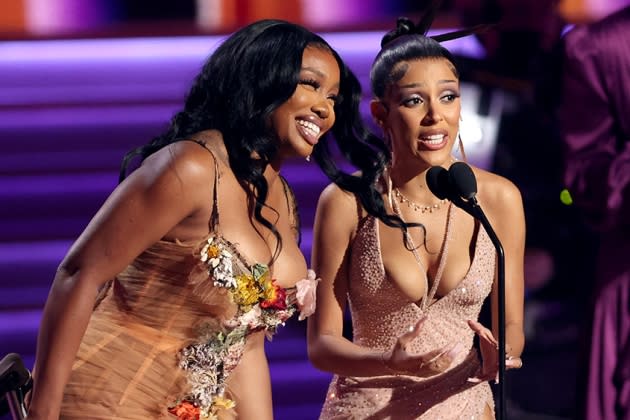 She said: “I fell out of bed before I came here.

Not only did SZA struggle to collect the award, but Doja nearly didn’t make it out as she was in the bathroom when they were announced as winners.

However, the ‘Say So’ hitmaker paid a touching tribute to her collaborator.

She said: “SZA, you are everything to me. You are the epitome of talent. You’re a lyricist. You’re everything.”