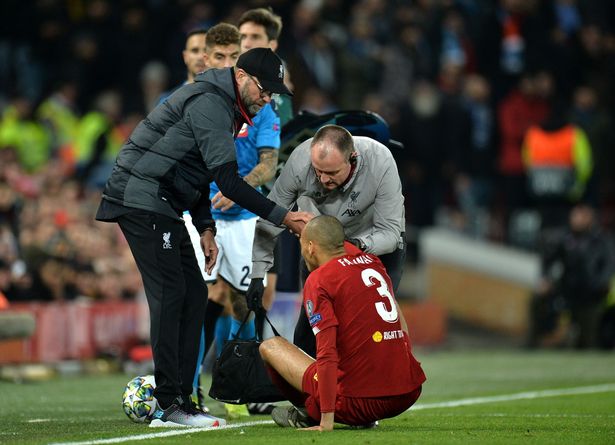 The Brazilian limped off with a hamstring injury in the Reds’ 2-1 victory over Aston Villa last week, and missed the FA Cup final against Chelsea and Tuesday’s win over Southampton as a result, while he’s also a doubt for the final Premier League game of the season against Wolves.

Despite the injury setback, Jurgen Klopp confirmed the club were hopeful that the midfielder would be fit in time to feature against his former club Real Madrid on May 28.

Liverpool have seen Mohamed Salah, Virgil van Dijk and Joe Gomez all join Fabinho on the injury list in the past week, though the Reds are confident the trio should also all return in time for the Champions League final. And the midfielder admits that Klopp’s squad are feeling the strain from their quadruple push, with the club playing the maximum 63 games possible to them this season.

“I think I can speak a little general. We are very tired,” he said. “It’s true because we’ve been playing on weekends and during the week for a month now, always game after game and important games, which makes you physically and mentally tired as well.

“But this team worked very hard to get here, to this point in the season with a chance of winning all four trophies. There are few games left, there is a final sprint.”

Fabinho spent the 2012/13 season on loan with Real Madrid Castilla, though he would be handed his senior debut by Jose Mourinho as a substitute in a 6-2 victory over Malaga at the Bernabeu at the end of the season. And while the Brazilian, who joined Liverpool days after their European Cup final defeat to the La Liga giants in 2018, has been keeping a close eye on his former club in the build-up to the Champions League final, he insists he won’t approach the match any different as he looks to be crowned a European champion for the second time in four years.

“A Champions League final is very, very special,” he said. “Some players have the opportunity to play it once or twice, which will be my case, others don’t play.

“So it’s always something very special, with the very nice stadium, with the fans of both teams, with my family it makes it more special. But having been at Madrid or having played for Castilla doesn’t make it more special or approach the game differently.

Yes, I have followed them. Especially the last three games. I think they didn’t play the same day as us and I watched the games.

“Madrid have deserved to be in the final as well. They have had a very good year. Let’s see what happens on the 28th, let’s hope we win.”